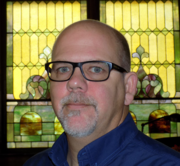 Stories can and will be told from this man who has nine older siblings and one younger. Born and raised in where he left at age eighteen to pursue higher education. In 2018 he returned to to become Pastor of First Baptist Church in . In his thirty plus wandering years away from he remained a tenacious Buckeye fan, imparting that wisdom on his now two adult children. Pastor Clay studied at outside of and most Friday nights during those years could be found in jail, expanding and deepening his view of God while sharing the love of Jesus with incarcerated folks. Ask him about the year he dressed up as Santa Claus.

After graduating from college, he accepted a call to serve under his mentor pastor who had moved to   After serving there, seminary was the next step on his journey located in , Between then and coming to he served a church in central , a church in the metro area and two years trying to literally follow Jesus via being a residential carpenter.

The following is an excerpt from a leader of the previous church Pastor Clay served. “I first met Clay a frustrated and questioning teenager. I was not a Christian, considered myself agnostic at the time . . . Clay wasn’t the type of pastor I was accustomed to; he would fully admit he didn’t have all the answers. And he would push you on your own assumptions and motivations. That spoke to me in a way I’d never experienced before, and it opened my heart to God for the first time.  . . . he walked with you to get you there. His teachings were both creative and energetic in framing new ways to consider the Word of God.”

We look forward to what God will do with our newly forming partnership with Pastor Clay. Want to join the adventure with us?